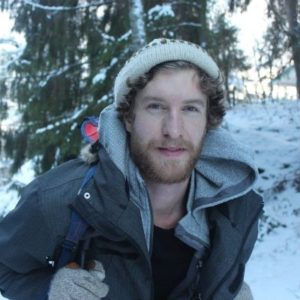 Yes, you’ve heard me. A real catastrophe. Yes, I am talking about CEMUS. That dark corner of the university. That place where students (students!), with doubtful motives and untrained hands, are set to indoctrinate young aspiring learners into self-motivated St Francis-style veganistas. And they have done it for a quarter of a century already! The point I want to make is this: CEMUS is a catastrophe. A catastrophe for the learners, for the people working with the courses, and for the university as a whole. Here is why.

—
November 1st 1755. Lisbon is struck by an earthquake in the early mornings of the Catholic ‘Toussain’ celebrations. After the shaking, violent inundations and a series of fires ravage through the streets, leaving little but hope and despair for the thousands that have lost their home, friends and family members. Affected by the magnitude of the event unfolding in Portugal, Voltaire wrote a lengthy poem [1,2] questioning the reason for the earthquake itself. He start with an invitation. A call to see what has come of the Catholic city.

More than an invitation to see, he asks others to realize the extent of the damage done. ‘Why?’, then asks the philosopher, can a devout city like Lisbonne, be the focus of God’s wrath? What have all those pious souls done to deserve such a plight? This event allows the philosopher to question and further reflect on the ‘reason’ for this event to happen:

For Voltaire, this catastrophe allows him to question a specific idea, namely the central position occupied by God in determining the course of human lives. What Voltaire unfolds here is of interest: Would any God, if real, let such thing happen? More than that, this event allows for a reflection that goes beyond the role of providential powers in influencing human lives: it leads him to question the religious fundaments of society itself, and therefore begs for other explanations when the usual frame is not sufficient.

Might they manifest themselves physically or psychologically, catastrophes can make one feel as though all landmarks are changed, the south and the north are no more aligned. Old explanations do not hold any more.

A Catastrophe then holds within it the possibility for an unfolding. The potential for a realization. A confrontation. It can allow for a facing of the self from the depth of our acclimatized and all-too-well oiled routines. The lesson of catastrophes is perspective, it reveals the bias of our morals, and questions the direction of our aspirations. For Voltaire, this catastrophe leads him to ask:

——-
And in many ways, CEMUS is a catastrophe also.

CEMUS is my personal catastrophe. It ripped through my ideas of what it meant to learn, to teach and to think. It threw my foundations up in the air, and I watch most of it fall, some of it stick. This space allowed me to nourish the idea that alternatives are palpable and provided me with like-minded mercenaries, a family of Pirates ready to sail to new horizons, across stormy seas.

Of more significance, CEMUS is a catastrophe for the status quo. A place where assumptions are taken apart, and where hope is built with the leftovers. For the world of universities and of higher education, this center has, over the years, gathered a mix of people only commensurate to the diversity needed to make sense of the multiplicities of crises up ahead. An approach providing fertile grounds for learning indeed. And strangely, one has found that in this rich biome, it is not unlikely to see strange and peculiar approaches to teaching too. More than its unique content, the way in which teaching is occurring can surprise more than one academic orangutan in the current pedagogical jungle.

Last but not least, the students themselves. While student-lead might not be everyone’s cup of tea, I have seen more than one apprehensive student jump into the pool of self-directed learning, eager to see how deep it is. The little library, with its miss-matched furniture, crooked chairs and stained tables, has garnered more than just all-night crammers. A place where the threads of global, political, and personal are slowly being braided together. And for many of its shortcomings, one might see in it a little bit of a reflection from the outside world in there, a place where one can learn, think and act with others. Quite an achievement for the sterile environment often provided in universities.

For all of this and much more, CEMUS is for me a catastrophe. A perfect storm questioning why I want to learn more about the world around me, why we arrange our education and universities the way we do, and where that ‘societal transformation’ we all dream of might start from…. Far from providing any solutions, the questioning allows me to, step-by-step, make sense of a world constantly in transition. A compass with a question instead of its magnetic needle: why not? 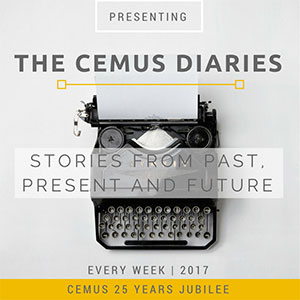 This is a part of the 25th Anniversary blog series “CEMUS Diaries: Stories from past, present and future”, where we invite present and former staff, students, work group members, associates, and other CEMUS friends to reflect on their time at CEMUS and shed critical light into the future. Read the other CEMUS Diaries entries here.

<< A Small Slice by Morag Ramsey