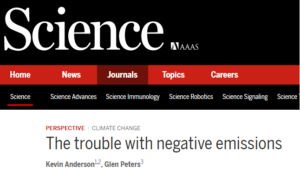 The Paris Agreement on climate change and the carbon-reduction plans of many governments (including Sweden) are unwittingly reliant on unproven technologies to suck hundreds of billions of tonnes of carbon dioxide directly from the atmosphere.

On october 14, the journal Science published a Perspective co-written by Kevin Anderson and Glen Peters, in which the scale and widespread reliance on ‘negative emissions technologies’ is revealed.

A selection of responses to the article in the media: